But confidence in personal finances is on the decline.

The experts are getting louder in their warnings that a housing bubble has formed in some parts of Canada, but Canadians don’t seem worried. In fact, confidence in the housing market hit a record high in the latest weekly Bloomberg-Nanos index — even as respondents turned negative on their own personal finances. The survey found 48.5 per cent of Canadians expect house prices to rise in the next six months, the highest level recorded in the survey since 2008. Fewer than 11 per cent expect to see house prices decrease.

“Household expectations have improved by roughly 10 per cent since the start of the year as the effects of the oil price shock have stabilized and the focus has moved toward rising property values,” Bloomberg economist Robert Lawrie said.

“In recent weeks, however, consumer sentiment regarding personal finances began drifting lower, with extended household balance sheets perhaps the next focus of concern for policymakers.”

High debt levels are precisely why many market observers are growing concerned about Canada’s priciest housing markets, namely the Toronto and Vancouver regions. House prices in Toronto jumped 33 per cent in March from a year earlier, to an average of $916,567. While Vancouver’s house prices have moderated over the past six months, they remain elevated, with the benchmark price at $919,300 in March. National Bank of Canada, which co-publishes the Teranet house price index, warned recently that “irrational exuberance” may be setting into some Canadian housing markets, noting that more than half of Canada’s regional markets are seeing price growth above 10 per cent annually. 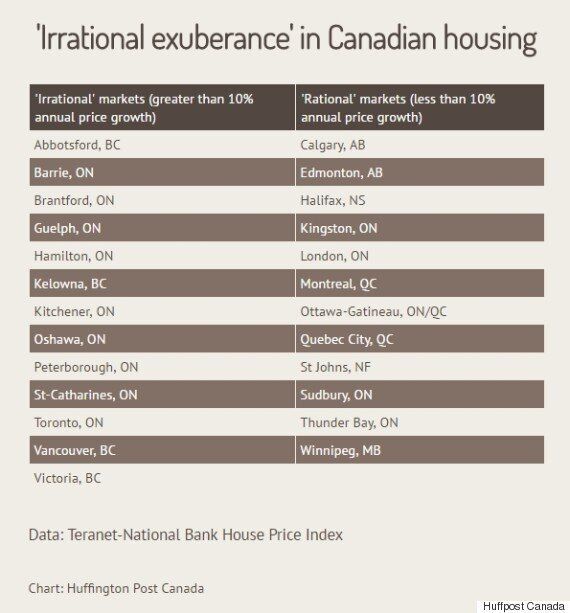 With mortgages ballooning, Canadian household debt has repeatedly hit record highs in recent years, and now stands at $1.67 of debt for every dollar of disposable income. Those elevated debt levels are the main reason one why the Bank for International Settlements (BIS), a Geneva-based “central bank of central banks,” warned recently that Canada has the second-highest risk of a financial crisis, behind only China. The survey of 1,000 Canadians took place in four waves up to April 21, the same day that Ontario’s new housing rules were introduced, including a 15-per-cent foreign speculator’s tax.

Many in the real estate industry say it will do little to cool Toronto’s housing market, as foreign speculators are believed to have played a relatively small role in Toronto’s market. The Bloomberg-Nanos survey found the mood surrounding personal finance has soured this year. The average score for 2017 so far has been 16.97, below the long-run average of 18.28. It was 18.04 in the latest survey. This means that some 18 per cent of Canadians see their financial situation as improving. More than 28 per cent said their finances are worsening, while some 52 per cent said they see no change.