The Toronto firm has developed the proposal for Innisfil, Canada, a primarily agrarian and residential town 60 kilometres north of Toronto.

Called The Orbit, the proposal aims to develop it into “the city of the future” with a host of new technologies, while also maintaining the existing agriculture and lush setting. 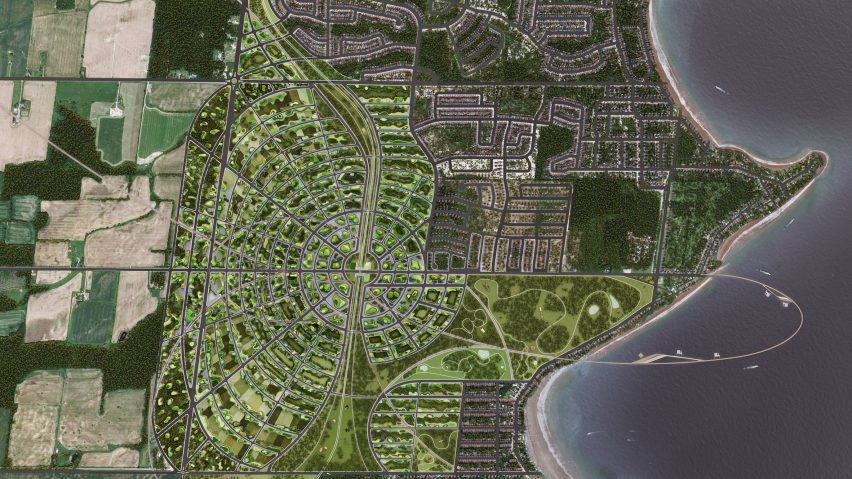 “The Orbit is our vision for a complete, cutting-edge community where small town and rural lifestyles are enhanced by the benefits and attributes of urban living,” said Partisans.

Advancements will include the introduction of a network of fibre optics – cables that transfer information quickly using optical technology – which will be used to provide connectivity across the development such as sidewalks, streets and buildings.

Drone ports and infrastructure for driverless cars among possibilities

The data collected from the system will then be governed by the appropriate privacy protection policies, according to the firm.

The project, which will span over 450 acres (182 hectares), marks the latest development for Innisfil. Partisans said the area is “renowned for thinking big,” noting that it currently accepts cryptocurrency payments for municipal taxes and fees, and was among the first places to pilot the Uber ride-sharing app. 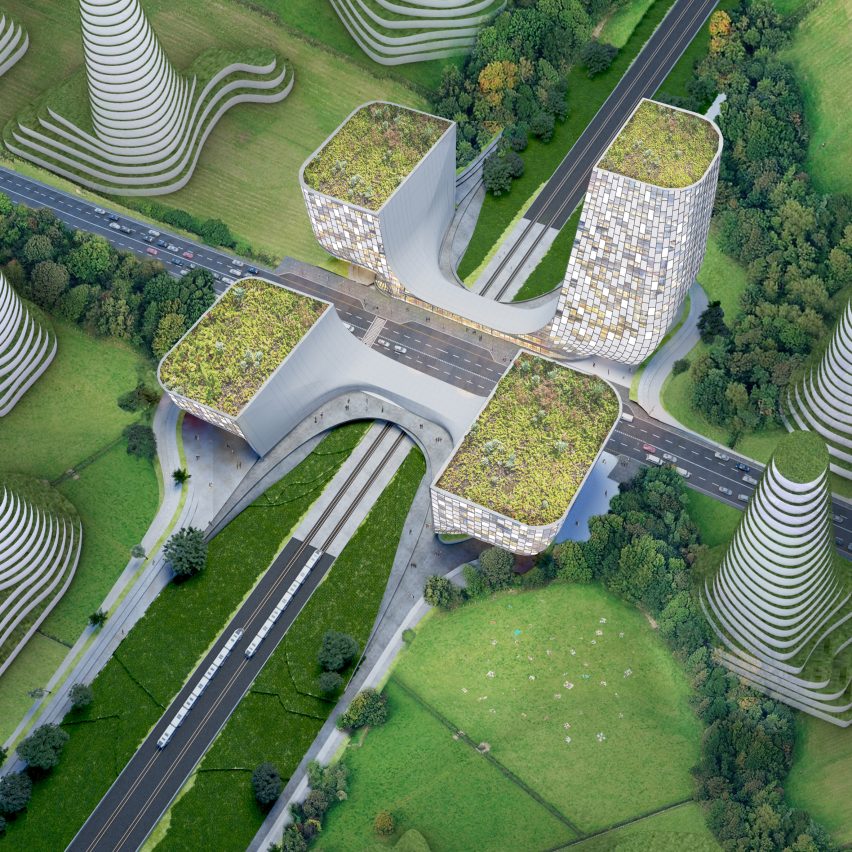 “The type of fibre and what it will be used for is still to be determined but given Innisfil’s record, everyone should expect great pilot programmes for technology to be used and integrated responsibly,” Partisans co-founder Alex Josephson told Dezeen.

“We have also discussed the possibilities of the following: state of the art health and wellness campus connected to larger hospitals in the region by technology, drone ports on top of the station for last-mile delivery, autonomous driving infrastructure and more,” he added.

Partisans’ masterplan is backed by local developer by Cortel Group and was recently passed by Innisfil Town Council last night. It forms one of a number of proposals for smart cities in North America that will be based on high-tech systems, and collect data to use for developments.

Among these is Sidewalk Toronto – a proposal for a smart neighbourhood on the waterfront of the Candian city led by Alphabet subsidiary Sidewalk Labs. 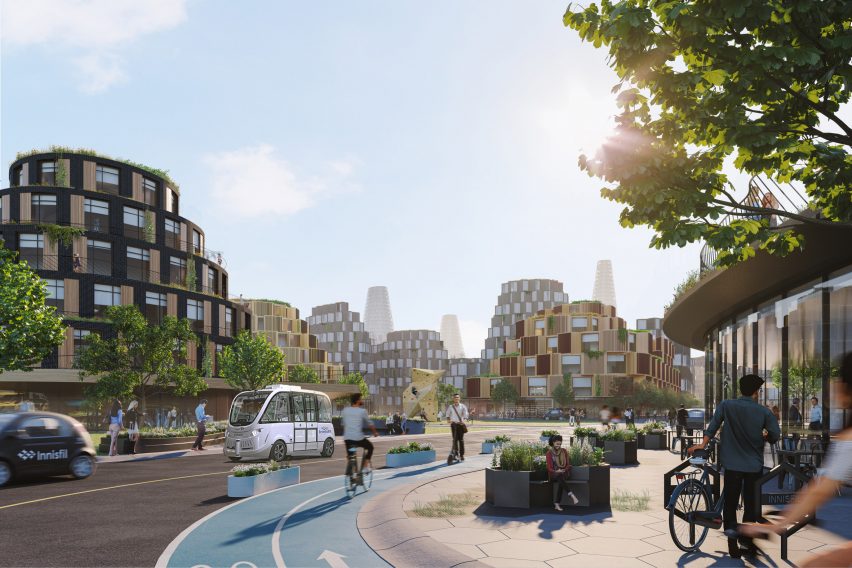 “Thus, our region is going to be one of the best positioned in the free world to manage the risks and opportunities of building smart communities,” he added.

The Orbit was prompted by the introduction of a new Metrolinx rail station, known as GO Transit, in Innisfil. It will join the existing regional public transit that services the Greater Toronto and Hamilton areas, and also provide a quicker connection between the city centre and more distant hamlets.

The new transit hub will form the centre of The Orbit layout, and will feature two mixed-use towers that will also house offices, retail spaces and residences. 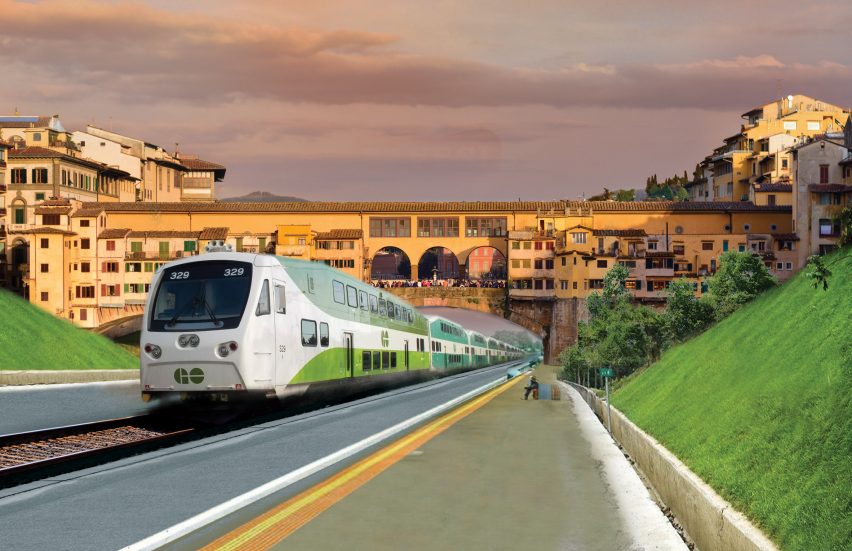 Roadways will wrap around this centre point and gradually expand in size. Partisans describes the shape of the streets as “squircles” – a mix between circles and squares.

“The city, inspired by the idea of an orbit will ripple outwards from this hub in a circular pattern, containing development, while embracing Innisfil’s agricultural roots,” the firm said. “Essentially, residents will be able to balance the benefits of living in an urban and rural community.”

Circular streets will merge with the existing street grid of the town, and be segmented into parcels, which renderings show with ample grass and trees. Buildings are also depicted as grass-covered and curvilinear, following the aesthetic of the masterplan.

According to Partisans, the scheme is influenced by the Garden City movement of the early 20th century, which advocates for the fusion of urban and agrarian life.

“Imagine that our squircle is a modern version of an old European city layout, combining a predictable pattern of streets with an added degree of irregularity and cut-through paths for pedestrians.”

On the outskirts, there will be spaces for agrarian activities, as the masterplan advocates for open areas. 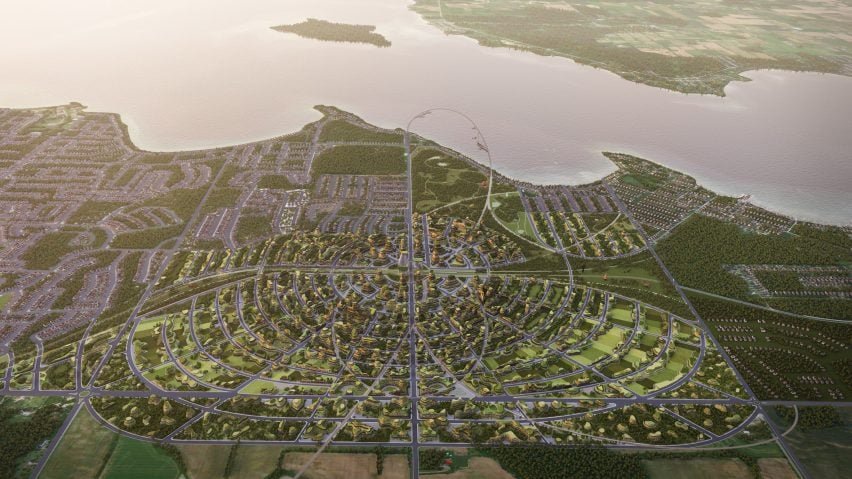 The transit system will also incorporate driverless vehicles and ride-sharing, to accompany pedestrian walkways and cycling paths. Access to trails and Lake Simcoe’s waterfront will also be created.

In total, The Orbit stretches over 40 million square feet (four million square meters) and is designed to accommodate a population that will grow from 30,000 to 150,000 people in Innisfil.

The studio believes the project provides a model alternative to the suburban sprawl, which is symptomatic of North American towns.

“Through intelligent and superior architectural design, the Orbit seamlessly consolidates and reduces sprawl, while providing communities with a closer relationship to nature while reducing pressure on infrastructure,” it said.

A school with a daycare, a farmer’s market and a library will also be included, as well as sports and recreational centres, and arts and cultural buildings.