Alphabet’s Sidewalk Labs has outlined its Toronto Tomorrow masterplan to turn a parcel of the city’s waterfront into the “neighbourhood of the future”.

Released 18 months after the team first announced plans to develop a high-tech “future city” on Toronto’s waterfront, the proposal consolidates a number of the design details that Sidewalk Labs has unveiled over the past year and a half.

The company has stripped-back its initial ambition to overhaul the entire eastern waterfront. Instead now focusing on creating two neighbourhoods in the city – Quayside and the western part of Villiers Island, which make up just seven per cent of the larger lakeside site. 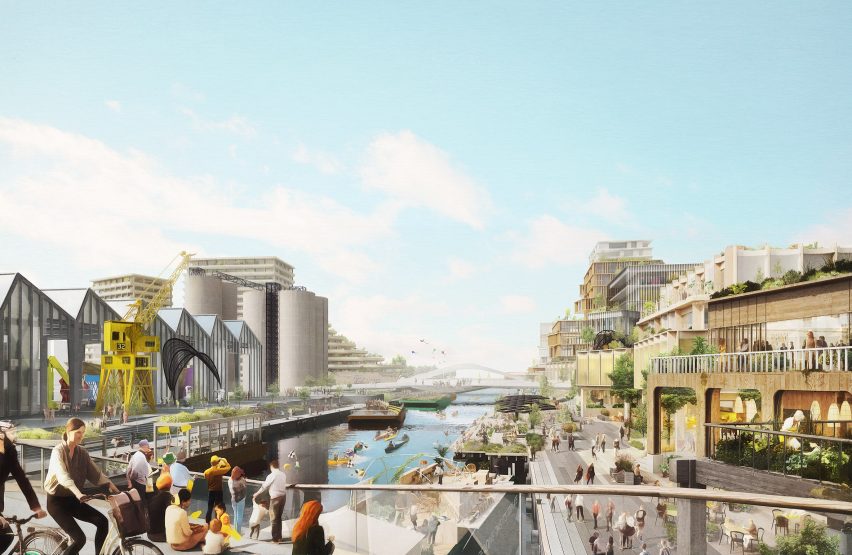 The two sites will be used to pilot a suite of ideas that the team has unveiled for the project. The intention is to scale these across a broader area known as the Innovative Development and Economic Acceleration (IDEA) District, which would cover one-third of the eastern waterfront.

“This proposal aims to do something extraordinary on Toronto’s eastern waterfront: create the neighbourhood of the future in the right kind of way, with people at its centre, and with cutting edge-technology and forward-thinking urban design combining to achieve ambitious improvements in the urban environment and in the way we all live,” said Sidewalk Labs CEO Dan Doctoroff.

The Toronto Tomorrow proposal includes plans to provide an example of an affordable and sustainable built environment with “the first neighbourhood built entirely from timber”. The mass timber development will be constructed using a new $80 million (£63,016,800) tall timber factory in Ontario.

Thomas Heatherwick‘s British design studio, which was tapped for the project earlier this year, has designed a group of timber structures for the neighbourhoods.

Snøhetta also previously designed proposals for the development. Dezeen contacted Sidewalk Labs to see if the architecture firm is still involved in the project but is yet to receive a response.

Buildings will be designed to adapt to a variety of weather conditions, as part of a wider strategy to encourage the use of public, outdoor spaces. These include the Building Raincoats, which offer protection to pavements in harsh weather, and the Fanshells, which are folding glass doors that lift up to open the interiors to outside.

Quayside, which is billed as a new type of “live-work community”, will include more residences than commercial spaces. Villers West, meanwhile, will occupy a smaller parcel that extends to the eastern waterfront, and comprise a higher ratio of commercial and work space.

A key element of this site a 1.5-million-square foot (139,354-square-metres) urban innovation campus, which is set to comprise Google’s Canadian headquarters, a research institute for urban innovation and an incubator for Canadian startups.

In total, the $1.3 billion development is estimated to bolster the local economy by providing and estimated 44,000 jobs and $4.3 billion in annual tax revenues.

Sidewalk Labs has also refined its controversial proposal to collect data in the city with “the strongest governance regime for urban data anywhere in the world”.

The aim is to create an independent, government-sanctioned Urban Data Trust to oversee the collection of information to be used for the neighbourhood’s design. Data will be de-identified and adhere to Privacy by Design principles so that it is not it from being used for advertising or shared with Alphabet companies.

Toronto Tomorrow: A New Approach for Inclusive Growth also outlines a way for the neighbourhood to generate 89 per cent fewer greenhouse gas emissions per capita than downtown Toronto at full scale. Alongside using sustainable materials, the plan includes a proposal for a smart disposal chain for recycling, stormwater management and a “clean” thermal grid for heating and cooling.

Sidewalk Labs was awarded the development project in 2017, after responding to an open call from Waterfront Toronto, which was seeking a partner to contribute to the revitalisation of an 800-acre (324-hectare) site east of the city’s Downtown area, on the edge of Lake Ontario.

Sidewalk Labs involved more that 21,000 Torontonians, while drafting up the MIDP.

The proposal will now be assessed by Waterfront Toronto and the City of Toronto, who will then decide whether the project would be scaled up to cover a larger area.