They’re just probably not in the parts of town you want to live in.

There are still neighbourhoods in Toronto where condos are affordable to first-time buyers — but they’ll have to move far from the nearest subway station, or urban shopping street.

Zoocasa has released a survey of condo prices in 35 Toronto neighbourhoods, comparing them to rental rates in those areas. It found that, in the northeast and northwest corners of the city — those farthest by transit from the city’s major employment hubs —  condos are still quite affordable. 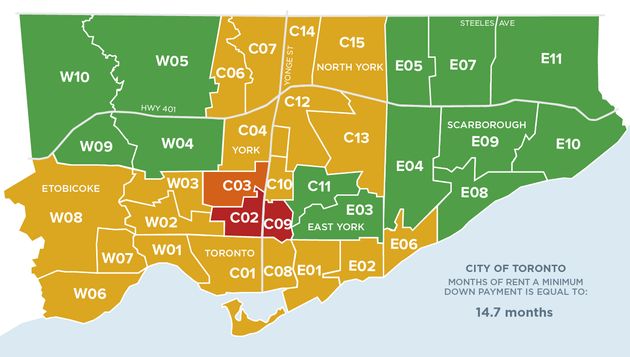 In 13 of the 35 areas, condos sell for around $450,000 or less, which is within affordability range for the average-earning household in Toronto.

In Scarborough’s West Hill area, the most affordable neighbourhood in the 416, a condo costs $325,223 on average, and saving up for a down payment would take the equivalent of 7.7 months’ worth of rent in that area.

(The folks at Zoocasa didn’t bother looking at single-family homes, given their price levels these days.)

At the other end of the spectrum is the Yorkville-Annex-Summerhill area, where it would take 74.3 months of average rent to save up for a down payment.

It’s not a coincidence that those far corners of the city are the most affordable. As researchers at the University of Toronto have been pointing out for years, the city is becoming increasingly segregated by income.

Research carried out by University of Toronto professor David Hulchanski shows middle-class areas in Toronto have been slowly disappearing in recent decades, replaced by high-income areas (blue in the chart below) and low-income areas (red). 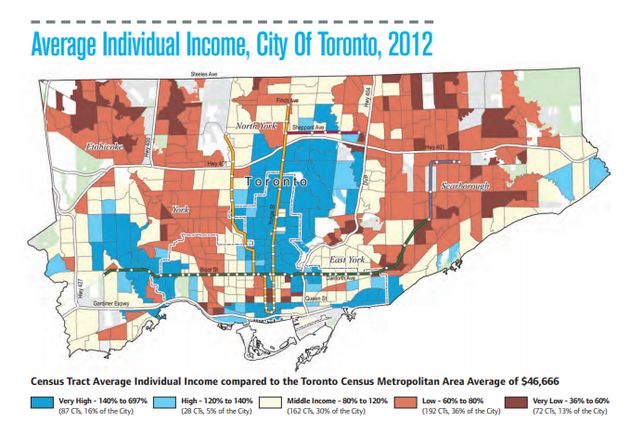 The wealthiest households now occupy the most desirable parts of the city — the “upside down T” shape that mirrors where the city’s subway lines and high-street retail corridors are located.

Zoocasa’s numbers may be offering a somewhat more positive perspective on things than really may be the case. The study estimates how long it would take to save for a down payment if the household weren’t paying rent — but that’s not a realistic scenario for many people.

Other studies, which take into account the fact that most people have to pay rent before buying a home, estimate much longer savings times. In fact, Zoocasa itself estimated that an average household saving 20 per cent of its income would need 32 years to buy a typical house in Greater Toronto. (In Vancouver, that rises to 52 years.)

Still, this latest study does give us a sense of which parts of Toronto are more (or less) affordable. Check out Zoocasa’s infographic comparing rents and house prices in Toronto districts.